A set of all four colours of a genuine Kampot pepper in a bargain set in a practical doypack with zip that perfectly protects the content from moisture and oxygen. The finest selection of peppercorns of black, white and red Kampot pepper inside a sealed 50g package with lyophilized Kampot pepper. read more

Are you tempted to explore the flavours of the far reaches of Cambodia but don't know where to start? Start with all of them at once thanks to a special combo of three essential peppers that spawn pepper plantations in far-off Kampot. Plus, we'll throw in a free unique freeze-dried green pepper that can absolutely upend everything you've ever known about pepper.

The kit contains traditional black pepper, also known as the black gold of Kampot, which surpasses any of the peppers offered in the supermarket with the intensity of its aroma and flavour. Taste its effects when paired with red meats, sauces, soups, pastas and other dishes.

If you're a lover of the unusual, you'll love the unique red Kampot pepper, which goes well with both savoury and sweet cooking. Thanks to its fructose-filled, fully ripe red skin, it can make sweet pastries, gingerbread, Christmas candy, but it is also suitable for desserts and don't be afraid to experiment with it when mixing drinks.

Those who like subtlety, on the other hand, will appreciate white pepper, which is a creamy caress to the taste buds and the whole soul. Thanks to its creamy refinement, this red and de-skinned pepper goes well with light meats, fish, poultry, but also vegetables, pasta, creamy sauces and soups.

Last up is green pepper, which is a great example of what we don't know about pepper. Soak the freeze-dried kernels in water, let them retain their moisture, and suddenly you have green kernels almost as fresh as if you'd just picked them at the plantation. Eat them like capers, or add them to your steaks or sauces. For inspiration on how to cook with our peppers, explore our blog, where you'll find tips and delicious recipes, including from Michelin-starred chefs.

The peppercorns exported to your table come from small family farms that approach pepper cultivation with integrity and traditional practices that have been used in the area for hundreds of years. We buy pepper from them under the fairest possible conditions. The kernels go through multiple inspections during the export process, ensuring that the most authentic flavour and aroma from Cambodia reach your table.

Included in the package is a The Story of the World's Best Pepper brochure with certificates of authenticity and information about Kampot pepper.

Certified pepper sourced directly from our farmers in Cambodia for fair prices.

In the Czech Republic, we check each peppercorn again and pack it in the highest quality packaging.

We aim to do good

Part of our profits go back to Cambodia as we try to help this country in various ways. 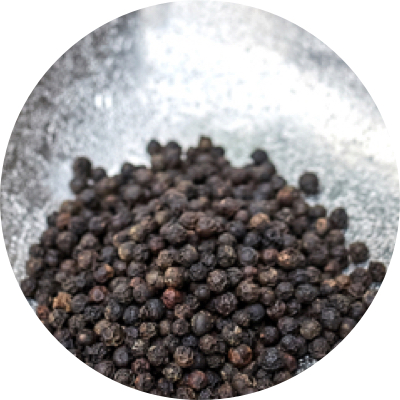 This is harvested, unripe, at the beginning of the year when the grains are green. Black colouring occurs as the corns dry in the sun.

Grill it, fry it, stew it! What? Meat! Black pepper is perfect for steaks, red meat, sauces, soups and also for all types of pasta and Italian cuisine in general. 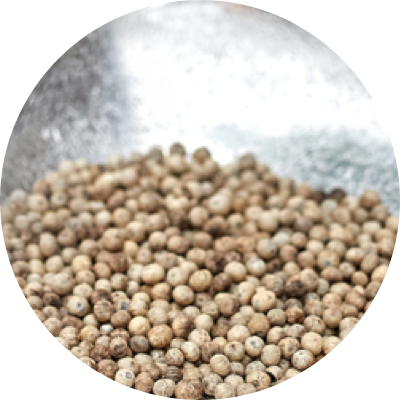 This is a champagne among peppers which has nothing to do with the white pepper you know. The white pepper you buy in shops here is just peeled unripe black pepper which tend to get musty and thus nobody likes it. The genuine white pepper is peeled from ripe red one (it is its seed) and so it gets its specific qualities for which it´s sought by top chefs all over the world – the white pepper opens up taste buds and multiplies the taste of each ingredient. 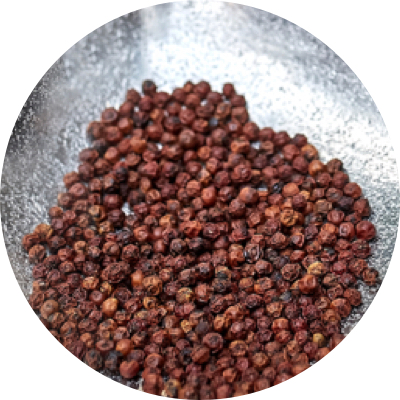 Genuine red Kampot pepper is unique in the world. It is extremely rare and grows only in a few places in the world. It is harvested fully ripe at the peak of the pepper season and thanks to its long ripening it is full of fructose, which gives it a unique sweet-fruity taste. The so-called “red pepper" (which is actually pink) we can find in the Czech Republic is not pepper at all and is so incorrectly labeled. It is a Brazilian peppercorn that grows in a tree and is popular for its colour.

Don´t use it for meat – it is a great friend with fish or seafood. On the other hand, you will love it in cold kitchen for vegetarian dishes, salads, vegetable, eggs, vegetable soups, risotto, sweet deserts, cocktails or Christmas sweets. 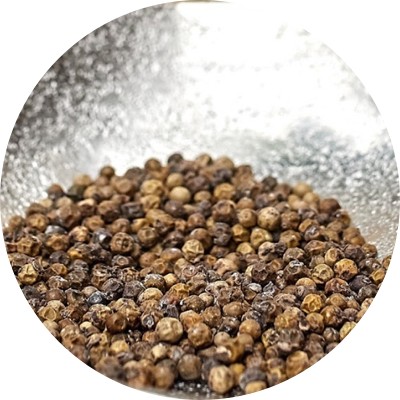 Fresh green Kampot pepper freeze-dried in the Czech Republic! A special process of lyophilization for keeping the maximal quality, freshness and taste accents of genuine fresh Kampot pepper from Cambodia right to your plate. 100% organic fair-trade product collected with love. When mixed with oil or another liquid, the peppercorn absorbs the liquid and then tastes like fresh. Do not put it in grinder, use it whole or crushed in mortar.

It is perfect for steaks, sauces, pasta, meat or crushed for grilling. 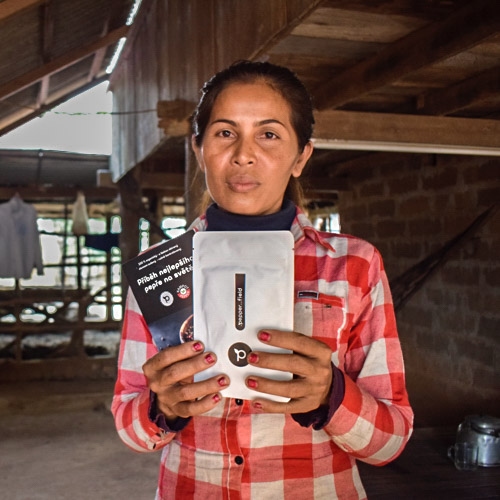 POV SOKHORN Supplier of Black pepper How will the farmer use the money? 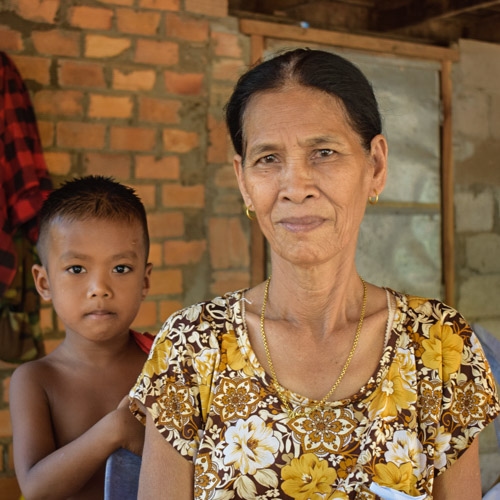 PANN VOCH Supplier of Black pepper How will the farmer use the money?

To pay school fees for her 2 grandchildren 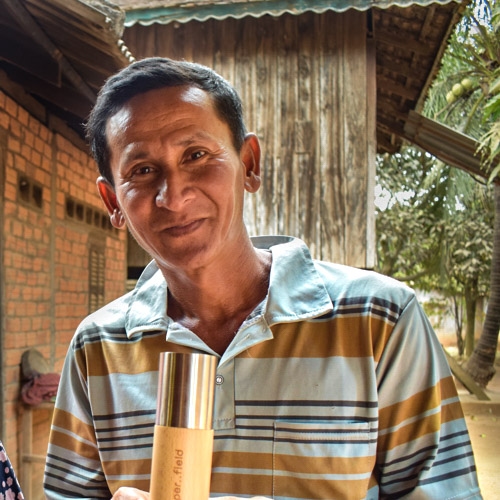 YIM YI Supplier of White pepper How will the farmer use the money?

To reconstruction of his house 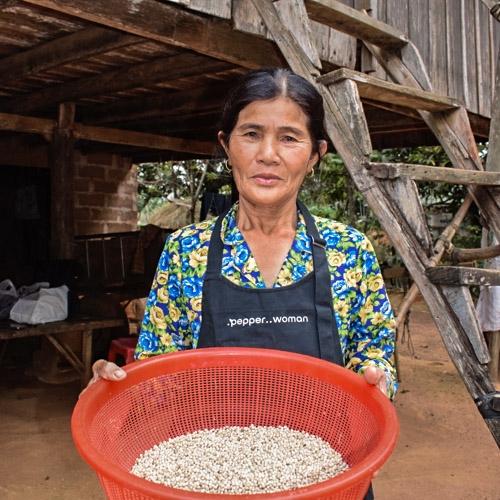 SVAY YUTH Supplier of White pepper How will the farmer use the money?

To travel to another part of Cambodia

Certificates of authenticity of Kampot pepper

Authentic Kampot Pepper must always be accompanied by four compulsory certificates that determine its quality, uniqueness, and origin. In addition, a ‘Lot Number’ must always be stated on the packaging. This number allows the pepper to be tracked right back to the specific farmer that produced it.

Proves the origin and quality of Kampot pepper. There are many cheap copies all over the world, named for example pepper from Kampot, pepper Kampot or pepper from Cambodia, which, however, have nothing to do with the real Kampot pepper. So, if your pepper doesn't have all four certificates and a lot number, it's not the genuine Kampot pepper.

Kampot Pepper became the first Cambodian product and the only pepper in the world to be given this status, similar to Champagne in France. It is a guarantee that your pepper has been grown in the most appropriate climatic conditions in the world, complying with the strictest standards of farming methods and techniques.

The international regulator, Ecocert, is one of the largest certification companies in the world. It checks and certifies products containing natural materials resulting from organic farming. At the same time, it grants PGI status to Kampot Pepper.

Specification of a given protected geographical indication

A specific list of rules that a given country must meet within PGI, from planting the crops to tracking the peppercorns. In Cambodia, the emphasis is on strict organic compliance and a ban on all chemical fertilizers.

"Extremely unique product with a great drive behind them. Awesome product and customer service. Perfect for a gift to impress your in-laws, boss or clients."

"First time I tasted Kampot pepper on our vacation in Cambodia, it was phenomenal! I am ordering the Kampot pepper from Amazon ever since. Now when I have an option to order from the smallest farmers, I can have great feeling whenever I open the pack as a bonus to the best taste."

"Got the pepper, it is very unique. I found it had more flavor and the aroma was wonderful. The pepper came in a small well sealed package. The ground pepper was a little spicier than regular black pepper, but not too spicy. I think it was most likely just fresher and delivered in better condition."

We are authentic, we love Kampot pepper and we would be happy if you would share your experience with us.